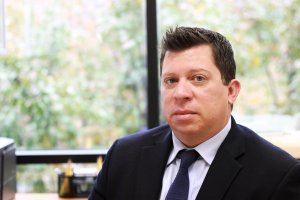 Sergio Alegre, OGC Solutions® | Santomassimo Davis LLP’s newest attorney, has worn many hats over the past two decades.
As head of compliance for two pharmaceutical companies over the last 10 years, he’s developed successful compliance programs from scratch and has also been part of a team that successfully sued the Food and Drug Administration.

As VP of Mergers & Acquisitions at NRT (part of Realogy Brokerage Group), he was lead counsel in the purchase of over one hundred companies, which added tens of thousands of new agents into the business.

When not at work, Alegre, who has lived in Ridgewood with his wife and son for 12 years, has served on the city’s Zoning and Planning Boards and has coached four youth sports: baseball, basketball and soccer. But what he’s really known for around the community are his talents as an expert builder for his son’s grammar school’s float in the town’s annual Fourth of July parade.
“The parade’s a pretty big deal,” Alegre says. “People from all over Bergen County go to see the floats, and they seem to get more elaborate every year.”

Over the years, Alegre worked with a group of other parents at his neighborhood school to “one-up” themselves each year with a creative float entry. The last one he helped create, was a 25-footer with a musical theme. “We built a giant drum and got a local band of dads to stand on top of it and blast their tunes from big speakers,” he says. On the other side of the float, Alegre and his team constructed a red carpet with a velvet rope where student “groupies” made up the audience. All around the float were carefully constructed, huge musical instruments, including a larger-than-life guitar and piano. “I have to say, I think this was one of my favorite floats of all time,” he says.

Float-building aside, Alegre, who joined OGC Solutions® | Santomassimo Davis LLP in May of this year), is looking forward to putting his many talents to work for the firm.

He was attracted to OGC Solutions® | Santomassimo Davis LLP because of its unique business model, which provides clients with access to a fully outsourced virtual legal department of 17 attorneys with deep expertise that spans the gamut. “The firm does great work,” he noted. “I love the idea that we can help small- and mid-size firms who aren’t able to pay for a full-time in-house general counsel or compliance officer manage risk while building their businesses,” he says.
And although he’s spent a good portion of his career in the life sciences and hopes to build the firm’s life sciences practice, Alegre says he is equally excited to provide compliance support to all industries.

“I’ve spent a lot of my time in the pharmaceutical industry, which is highly regulated, but a lot of other industries, like finance, need really in-depth compliance guidance, too,” he says. “In reality, all organizations — even schools — need guidance on the compliance side.

“I’m really eager to build out the compliance capabilities here at OGC,” he says. “With our business model, I think we can help a lot of companies.”